Life was hard in the elven lands, in the time after the war of the Alliance and the Horned King. The great mages of the druid traditions, The Lords of Night, were no longer welcome to preach their tenets of thaumatological enlightenment. Their homes were raided by angry mobs, their temples ransacked and torn down, their scrolls and tablets burned and broken. The great writings of the First Lord were now gone, his acolytes and their apprentices scattered to the winds. This was the time of the growing dark. This was the time to wait, to learn, and to teach. This was the time where, for every wounded martyr and slain worshipper, three would rise from the shadows to take his place. Hatred and distrust was growing. Fear ruled. Chaos reigned.

For three human generations, the elven kingdom would be in turmoil. The high Druid could only placate his underlings and bow to foreign powers. In his only official act as ruler post-war, he would call home all elves living in the human lands; it was a transparent attempt to rebuild his worship as a false prophet of enlightenment, preaching understanding and fellowship with the spirits of the land, while out of the other side of his mouth speaking down upon mixed pairings and dwarven outsiders. His weakness was never more apparent, than in this time of troubles. This weakness was exploited, and in the shadows of the raging bonfires, deals were struck and brokered. Great elves, capable of learning the arts of Night would be recruited. Great minds capable of being sharpened to the honed edge the Lords required. The High Druid left a deep shadow for those below him to be cloaked within.

Deep within the Eastern Jungles of the Anhaern, on the very cusp of the blighted lands of Gorgoth, perched and nestled safe in the mountain bluffs overlooking desolation and flaming ruin; There was the Temple of Night. A great monastery, but also a great fortress. Hidden high on bluffs with only a narrow switchback pass to the gate, it was a redoubt of solitude and seclusion. Here, so close to the very dark velvet drapery pin pricked through with twinkling stars, this was the world that sheltered Deloth-Ainur. It cradled her barely a year before training would begin in earnest. The first year from her birth, she was promised to The Darkness. Plucked from her mother’s arms by silver-clad hands, she was nestled at the bosom of ash and sulphur. Her hearth was warmed on hellfire, and her bed was kept by skeletal hands.

The Acolytes of Darkness, the children of Night, keep a quiet existence in their home in the mountains. When the mood takes a Lord, he will teach an underling the invocations to summon their benefactors, the Demons. A barter will be struck, and an exchange will be made. The nefarious ones work with elves in relish, as their long lives and affinity for the forces of the Veil of Magic allow them great long lasting influence in the realms of the mortals. The undying elves, in return, are granted the great breadth of magical knowledge the Night can provide. Cloaked in the powers of Darkness they are nigh-unstoppable, slipping to ethereal forms, breathing poisonous gasses, or practicing martial arts designed to kill in torturously painful ways. It is a brutal, violent, and treacherous life. One best suited to ruthless cut-throats and psychopathic murderers. Deloth-Ainur took a more circuitous route than most to achieve her power.

The dark invocations that promised her life to the service of the Demons and their eventual rightful rule of the land were blistering words spoken by callused tongues. When the tirade of hatred and bile were spoken the hells themselves rose up to take her. Hands clad in silver gauntlets reached for her, a flowing cloud of glimmering coinage shimmering on the smoky air behind them. As the hands sunk deep to the wailing babe’s flesh, they passed through, her shadow the only thing they could grasp in this world. It was torn from her, ripped away, leaving her raw and alone grabbing for any comforting embrace that would hold her. In the darkness, those hands reached again, and the silver-clad gauntlets held her, stroked her hair, and cood sweet nothings to her. The infernal speech was sickly sweet, and the only sound that arose above the crackling fires and ebbing woes of an infant, were the deep sorrowful wails of a mother now free of infernal debt.

As the young elf grew, she was quick to learn from cruel instruction. At each critical juncture, the tutor would speak with that sweet voice, and offer her a glimmering silver coin, polished fine in the light. Twinkling tokens of worth earned from her first solid strike, her first honed blade, and her first remorseless kill. Each coin would slither in her grasp, squirming to join the others, and her bubbling laugh would accompany it’s long trek to join the others clinging to her body.  By her thirtieth year, she had earned enough tokens from her master, that she wore no clothes but a silk screen, armor-clad in a slithering mass of living coinage. The clink and jangle of the metal the only betrayal of her presence, a twinkling music in the ears of her victims, heard in the moments before their violent demise.

She would be sent out then, to work in the name of the Lords, speak the tales of the masters and her servitude to them. Ranging far and wide in Gorgoth, the Anhaern, the Southern reaches, she would sow discord and envy. She would speak sweetly in the ears of men and women of the lands, guide them to their beds, and dispatch them whenever the demanded of her. She stalked the night as a tiger, took no prisoners, gave no quarter…except she burned with the desire to touch another. She was craven, and took to the haystack with farmhands, or the bed with merchants. She clung to them in the firelight, silver glinting in her eyes and on her hands, and when she knew (as each time she would know) their time would not last, she would slay them. Tear from them hearts full of promise and wonder. Bosoms swollen with hope and surrender to her. She would be comforted with the thought that maybe they would not know it was her, surprise masking her betrayal.

But this would not last.

One angry mistress, one poorly hidden grin, and one angry mob later, a harsh lesson was learned by the Child of Night. She crawled on her belly to sanctuary that eve, the twinkling bright stars above laughing at her folly, cackling at her failure to serve. She scraped low to her Lords, begged for assistance, bartered away what she could spare and much of what she couldn’t. In the festering blackness, she would heal, a long and painful learning experience. It hardened her, finally, against the hope of a different life. The fury of her passion was quenched in the oil of the dark. She was tempered in her resolve to serve.

Nearly an age passes, the moon rises and falls, the sun gives way to blessed night. In the darkness, whispers appear on the winds. A susurrus of prophecy, ash and dust creaking in the bones of the servants. The time has come again! IT will rise! Prepare! She was sent to the night, cloaked in the power and swift as the wind, travelling by pointed finger to the North, where troubles had begun anew. Beastmen stirred to dark tidings, the Lords invoking their beastial rage, an invitation to carnage and slaughter unheard of since the Horned King ruled. She would slink between them, whispers guiding her ear from a distance, and she would find them there on the borderlands. The dark heath behind her, the green steppe above. Men, dwarves, scorned, and elf. They would hear her, and listen. The wheel would turn around them, the moon look down upon their fates and smile. She would greet them, and watch, listen. She would stamp down her base desires to do so. She would not fail them, never again. 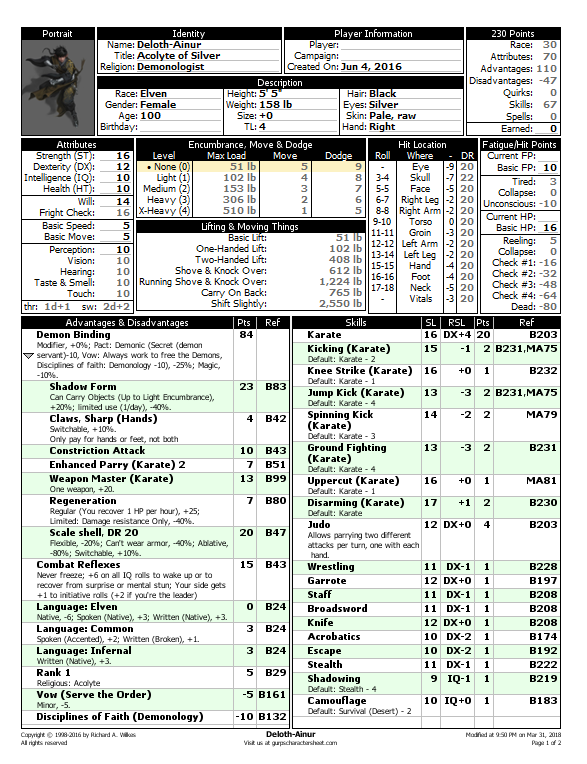 I'm an avid gamer, computer troubleshooter, and all around dashing fellow. I blog After Action Reports on my gaming, running as the GM for several GURPS 4e games
View all posts by KentonBlack →
This entry was posted in #GrimWyrd, #GURPS, character bio, NPC and tagged #Character_bio, #gaming, #GrimWyrd, #GURPS, NPC. Bookmark the permalink.

This site uses Akismet to reduce spam. Learn how your comment data is processed.